If You Don’t Bear Your Cross, Someone Else Will Have To 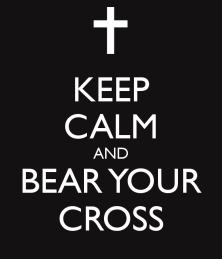 On July 17, 2016, I preached a sermon entitled “Broken For You”. The idea behind the sermon came down to the idea that if people took 100% responsibility for their lives the whole world would be transformed in an instant. The spark for the sermon came from Jesus’ teaching that those who desire to follow him should deny themselves and take up their own cross DAILY and follow him. This spark was fanned into a flame when I encountered the mother and daughter who I mentioned in the post, “Mixed Feelings on Race?”

Since preaching the sermon, I have been wrestling with to what extent I should share it. Granted it is already on the church’s website so people could share it if they want to, but for me to personally share it felt like a weighty matter. At first I thought that I was hesitant to share it because I didn’t want to seem arrogant for putting it out there. But when I checked in my heart, I knew that wasn’t the case. It wasn’t until I showed it to another pastor that I realized what it was.  I was scared to share it because I didn’t want to take responsibility for people’s reactions to it.  Pretty ironic considering the subject of the sermon huh?  So my next question to myself was why wouldn’t I want to take responsibility for it.  My answer came from a facebook post from a black police officer who was in a struggle of his own with regard to the cross he bears as a black cop in a predominantly African American community.

As I read his post I realized that I was nervous about sharing this sermon, because I was concerned about how people would interpret me saying that I feel that as a follower of Jesus I am supposed to take 100% for my experiences in life–even the racism that might be directed toward me. The point I was trying to make was that I believe that every person has a cross they have to bear in this world and if they do not bear it someone else will have to–hence the injustice we see.  As I see it, all injustice stems from the denial of our Oneness. Coming from this place, I feel like blaming anyone for my experience is a denial of truth and as a follower of Jesus I need to figure out how to own my experience and forgive just as he did. Do I hold other Christians to this? Definitely not. Their walk is between them and Christ. What about other religions? Who am I to judge? And yet, in holding myself accountable, it is inevitable that it will affect those with whom I engage. I was concerned that people may think that I am letting racists off the hook or that I am proclaiming a pushover gospel.  But after further reflection, I have to accept that I am the worst kind of hypocrite if I don’t just shine and take responsibility for the shadows that might be cast and the projections that may be reflected back.

So with that I am sharing the video, “Broken For You” because this is what my light looks like. My hope is that it speaks to whoever comes in contact with it and that it blesses you.