You know what I don’t get? Racist Christians or racist people who practice any spiritual discipline for that matter. But having spent all of my life in Christianity, I really have to say that nothing is more perplexing to me than a racist Christian. Considering that Christian literally means, a follower of Christ, I have to wonder where racist Christians think they are following Christ to. Racist Heaven? I just don’t get it. To me, being a racist Christian would be like a dentist who opens their practice in a candy store, flosses their teeth with Twizzlers, and uses powdered sugar for toothpaste and Karo syrup for mouthwash. I mean really… 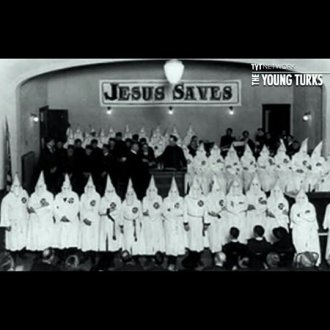 And yet, on the extreme, you still see people like the man in the video below, who think that they are doing God’s work when they act like an overseer who didn’t get the memo that slavery was abolished (at least theoretically). On the more subtle end, you get people who pride themselves on not being racist because they can tell the difference between Patti LaBelle and Aretha Franklin, but when they see someone who looks like me, they run out of the ATM Room so fast that they forget their money (this happened to me a few weeks ago).  Is that the direction they think Jesus is going? Following him where? I just don’t get it. This is a man who chose to go to the cross. You think he’s afraid of people based on their race? This is someone who made the good guy in one of his most famous parables a mixed race outcast and made the religious folks who would eventually call for his execution look like non-smart people (trying to keep it positive). Where do you think he was going with that story? A klan rally? Come on man! Where’s the disconnect here? Jesus doesn’t endorse racism!

I’ll admit, as an individual, I don’t even want to think about Christians who justify racism as being representatives of Christ in the world. In my personal opinion, this type of representation makes Christianity look like the Yugo of religions. But because of my personal experience of Christ, I feel compelled, to hope for a space of grace even for the racist. In essence, I am choosing to say, “If you think you’re following Christ, let me be the first to tell you that you are going in the wrong direction. You’re following the rear-view mirror version of the one who said, according to your scriptures, “I came to proclaim good news to the poor.” And the one of Whom Paul taught there is no division, race or otherwise.

As I see it, racism and all forms of separation are a denial of God’s invitation into the reality of Oneness. According to the Johannine Gospel (Gospel According to John), in his farewell discourses, Jesus prayed for his followers realization of Oneness. How does division play into that? That’s something I’d be interested in asking someone like this man, Jimmy Taylor, who sees himself as a missionary of the Gospel and yet can call some a “N****** b****.” Did he find that in the Bible?

I know that some people see addressing issues like racism as a distraction from Christ’s teachings and more divisive than anything. No offense to that idea, but I believe that to not talk about it is dismissive. Furthermore, from the vantage point of the Cross, these are precisely the things we should be addressing.  If we are to express the Realm of God now, I believe we cannot make room for this world to continue to be a place where racism, poverty, sexism, etc. have the air to breathe.

2 thoughts on “Jesus Went that Way! – Race In the Face of of Grace”