In Light of the Red Letters 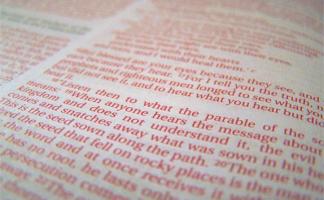 There is Love here

When I asked my friend Will from school what denomination he was, he simply responded, “Jesus follower.”   I wonder when they will make a check box for that because soon I will have to begin my ordination track which means going through the process set out by a specific denomination.  You would think that by now I would be more certain of which denomination best suits me, but in fact I am not.  Although I was raised Baptist and from there spent time in many other more evangelical denominations, I cannot say that any of them suited me.  Even non-denominational churches that I was a member of never scratched my itch for God.

Ever since I was about four, I’ve been conscious of having God on my mind.  When I heard the words, “Our Father…” in the Lord’s Prayer I was hooked.  I was one of those sons that was in love with their dad and when mine moved to Mississippi when I was around that age, hearing that I had another Father that was always available was very appealing to me.  Right before I started clinging to God I had decided that a helium balloon from the Tower Mall was my new dad so obviously I was in need.  When the balloon slipped out of my hands and entered the sky above I became conscious of my attachment as I screamed “Daddy, Daddy!” and somehow knew that I should draw nearer to this other Father that would never be absent from me.

I took the idea of God as my Father very seriously and began asking lots of questions from my elders.  Then when I began to read I started reading the Bible for myself even though I did not really understand a lot of it at first.  I was told that was how I would learn about God so I did the best I could.  I tried to pay attention in Sunday school and church and I talked to God every chance I got.  I loved the Bible so much that I used my allowance to buy a comic book version that was written similar to a graphic novel as well as a miniature Bible that came with a magnifying lense.  That way I could carry my Father around with me everywhere I went.  It was great.  Any time I felt sad about my earthly father being gone I would pick up one of my Bibles and just start reading.

The pictures in the comic Bible really helped me to get an understanding of what I was reading. Then when I switched to my mini Bible I could draw on the imagery when a passage was a little heavy.  Like the balloons I was attached to my Bibles and then suddenly like the balloons they floated away.  For some reason one of my mother’s customers “borrowed” my comic Bible and never gave it back and I left the mini Bible at an out of town church we were visiting.  I was pretty upset at first, but my mom just told me to imagine that some other little child was enjoying them as much as I did and that made me feel better.

Still, I thought that as long as I wasn’t holding a Bible I was separate from God so I needed to get another one.  I couldn’t find a mini one anywhere.  Fortunately, my grandmother was one of those women that handed out tracts and New Testaments at the mall so I asked her if I could have a couple of NTs until I got another mini Bible.  Of course she said yes.  And that was when the Red Letters caught my attention.  I kept two copies of the NT with me at all times just in case I lost one.  These were Red Letter editions–meaning that all of the Words attributed to Jesus were in red.  It was the coolest thing I had ever seen.  Keep in mind that I was still under 10 so I was easily impressed.  I wished that all books had different color letters.  From then on the Red Letters were all I wanted to read.  So that’s what I did–over and over and over again.  It was a long time before I got a new Bible and started back into the black letters.  And when I did, I realized that I understood them differently than I had previously.

There is a movement out now called The Red Letter Christians.  Admittedly, I do not know that much about them.  I have visited their site and read a few posts.  When I first heard the name it really struck me because at some point in my theological development I realized that reading only the Red Letters for as long as I did had deeply effected the way I understood God.  I saw God as all Loving and as Love itself.  I saw the redemptive work as Jesus as a Testament to Love and as a sign of  how absolute God’s Love is for everyone.  And I saw the parables that Jesus tended to speak in as word pictures designed to strengthen others who were working to embody Love as well.  And for those who were still blinded, he was secretly planting seeds of Love that could at some point take hold of their consciousness and open their eyes to the Reality of God’s Loving Nature.  Once I was steeped in this point of view, I saw it everywhere in the Bible and even in my outer world.  However, it did seem that the more I saw God as absolutely Loving, the less I had in common with the members of my churches, which brings me back to my struggle with choosing a denomination to be ordained under and my interest in what the Red Letter Christians had to say.

In one of their posts that I read, it seemed like they were making a distinction between a Red Letter God and a Black Letter God.  If this is the case, I cannot agree.  I can however understand the idea of a difference between a Red Letter and Black Letter perception of God.  In my perception God is One and is always Absolutely and Wholly Love.  To me, seeing God any other way is a matter of perception. My goal–if you can call it that– is to always realize that we all are as intimate with God as Jesus is, to see that reality in all of God’s children, and to forgive myself and others when we know not what we do.  I do not believe that Jesus came to tell us what will be or even to undo what was. I believe he came to tell us what is.  Everyday we are given countless opportunities in our thoughts and in our deeds to take the most Loving stand.  This is the Rock upon which Christ stands alive and well for eternity.  Who can say that they are looking toward the Light of Christ and have less than a desire to see Love in and for All?