Will the Disrespecters of the Flag Please Stand Up?

I have been doing my best to write a post about my perception of the current NFL  protests without sounding like I am too biased. But, after several attempts, I have given up. If I’ve learned anything in my forty plus years on this planet, it’s that a significant number of us think we are righteous in our opinions. (If you are interested in learning more about how The Righteous Mind works, check out the work of Jonathan Haidt.) That being said, I’ll just write under the assumption that I am not changing anyone’s mind. This way I can just get this off my chest and move on. So here we go.

If you’re paying attention, you can see that our nation is in trouble. And, there’s not enough denial in the world to hide us from ourselves. Additionally, America has over-estimated its moral prominence in the world for way too long. People know our history. And just like when it comes out that someone revered has a shady history and people start demanding justice for the victims, there are people who are waiting for America to own up to its past.  Sadly, there are many who want the American experiment to fail just as much as our own major political parties want each other to fail. And daily we see where that is getting us. But the good news is it’s not too late. All we have to do is start thinking more critically, be open to learning, and start practicing what we preach to other nations. Uh oh.

America has an amazingly rich history of rewriting history.  Of course we aren’t the only ones who do that. But I don’t live anywhere else. Besides, we have taken it upon ourselves to be the moral standard bearers of the globe, so when we tell people to get the speck out of their eye while we have a log in our own it kind of looks…well…hypocritical. Get mad at Jesus if you disagree. For more on what I mean by that check out the video below.

There can be no deep disappointment where there is not deep love. — Martin Luther King, Jr.

One of my biggest challenges is staying in a place of grace when engaging with people who cannot acknowledge the limits of their awareness on certain subjects and yet will refuse any opportunity to be educated. Take for example the many people who are having such a hard time with the NFL kneelers. Many of them say that their argument is that they believe that these players are disrespecting the flag. But do they really believe that or are they simply reacting to what they have been told is the right thing to believe.

I get that it might genuinely feel like you’re offended, but are you really? No one is born with an opinion about a flag one way or the other. The fact is that we have all been taught and dare I say, indoctrinated, into the belief that the only way to respect the flag is to do so standing with hand over heart or saluting when in uniform (which I did for 8 years). Under that programming–and it is programming–we think that to do anything other than this is blatant disrespect. We take it almost as a self evident and universal truth. It isn’t. Even if we claim it is. Proof positive that how one shows respect for the flag isn’t intrinsic is that our President didn’t naturally respond to the customs and courtesies of the flag recently. When the flag was being lowered during retreat, Trump joked with Sean Hannity about who the bugle was being played for. When I was in the mil, you would get chewed out by anyone who saw you for walking and talking during retreat. We would literally stop in our tracks and get quiet wherever we were. Since he went to a military high school, you’d think that President Trump would know that. But…

Yet, I am not judging him. Unfortunately for him, he has already judged himself. According to his religion, whatever you judge on someone else is supposed to come back on you.  He has judged that anyone who disrespects the flag should be fired. His words. Not mine. I have no such judgment because I know that God did not create a flag and say, “Thou shalt respect the flag in such and such manner.” I understand that we made this up and consequently are meant to be served by this cultural creation but are not indebted to it and called to serve it like automatons as if it were a god in its own right. Knowing this, I still–out of my freedom–choose to stand and put my hand over my heart. And often, I wish I was in uniform so I could salute the ideal that the symbol of the flag is supposed to represent. That being said, I know that we are a far cry from that ideal and can totally see why some people see it as an appropriate protest to use their platform to remind us of this fact.

Of course some people will say they don’t have a problem with the protest. They say they just don’t think that a game is the right time to make that statement. They say, “I just came to see the game, not to see people making a political statement.” Duly noted. But consider this. If you really just came to see a game, why care what someone does during the anthem at all? The anthem isn’t any longer or shorter because some people choose to kneel. Why have an opinion at all. Just stand up or sit down or do whatever you want to do out of your freedom and then just watch your game.

Forget the fact that Kaepernick was not really trying to make a “political statement” in the general sense but rather just trying to peacefully draw attention to an expression of the injustice in our society that has existed for hundreds of years. If you say you don’t care, don’t care. Let people kneel and let the people who do care and have a heart for justice be stirred to compassion. Meanwhile, you can just keep eating nachos and drinking beer when people die and flip through the channels when you’re inconvenienced by another video of a unarmed black person being killed. It’s your right as an American to be as distracted as you want to be.

Another point of consideration for those of you who just want to watch your game is to question why we play the anthem at sports games at all. I’m not saying we shouldn’t. But, according to the “anti-political statement at your game” logic the singing of the anthem itself turns the games into political statements. And it didn’t help that some prominent people started piling other things on the protest to make it even more political. Do you have any comments for them or are you only upset with the people who ruined your game by wanting people to acknowledge that people are being killed by those who swore a duty to justice. Ask yourself this question and you’ll get a sense of where your biases are. Are you open to discussion?

Then there are those who can’t hear anything because they are so upset that, in their opinion, the troops and flag are being disrespected by people kneeling. Completely ignore that Colin Kaepernick was advised to kneel by a veteran. Surprisingly, or maybe not so surprisingly, many of these offended people have never served themselves (But they always have a story about why that is the case.) and are the biggest violators of the US Flag Code. I learned about the code when I was in the military and ever since have had an eye for what is decreed as actual disrespect.  Just to give you a little insight into what I mean, here are a few points from subsection 8 entitled, Respect for the Flag: 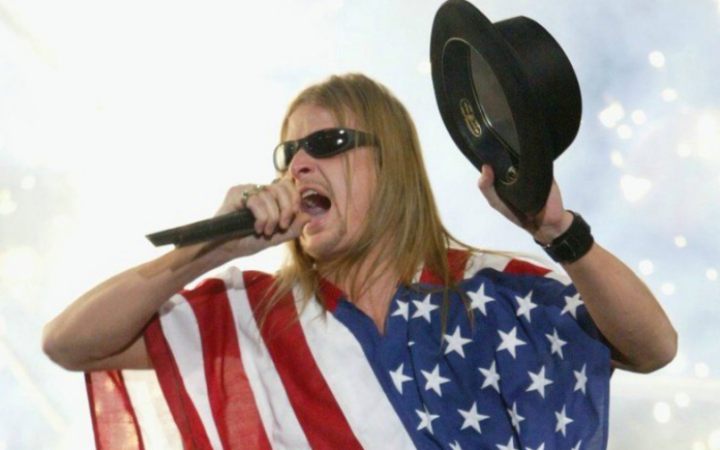 Now perhaps all of these people have read the code and decided that they are so patriotic that it doesn’t apply to them. But, somehow I doubt it. I also doubt that pointing this out to them will make them a little more reasonable. Instead they will likely find something else to say like, “These vile kneelers are coming after puppies and bald eagles next.” But will they admit that they and many people they know are actually the legitimate disrespecters of the flag according to the code? Probably not. And many of them will somehow equally be able to convince themselves that those people who fly the confederate flags and sing the confederate anthem are not disrespectful nor are the people who rally around statues of people who tried to defeat the Union whose flag they claim to respect so much. But call them biased or a hypocrite and they will get all bent out of shape.

So here are my final thoughts. Who are the real disrespecters of the flag, the people who have enough faith in America to believe that despite being the victims of its past of genocide, chattel slavery, lynchings, reneging on treaties, Jim Crow, war profiteering, and corruption, it can still “live out the true meaning of its creed” or the people who think that it’s greatness is only in its past and their hope is a return to that past? Who honors the troops more, the people who really believe that we served for their freedom and are daring to exercise those freedoms so that we can be a better country or those who see the troops as expendable means to their ends of achieving agendas that benefit the few? Who truly has a heart for freedom, justice, and equality, those who have been denied it for centuries or those who take it for granted because they received it automatically and see wearing flag apparel and standing for a song as sufficient for them to tell other people to leave the country?

As I said when I started this post, I don’t expect to change the position of anyone who has had their mind made up for them a long time ago.  But, if you are a person who is willing to take inquisitive risks, I invite you to ponder these questions and perhaps offer some of your own. I’m as open as I expect others to be. 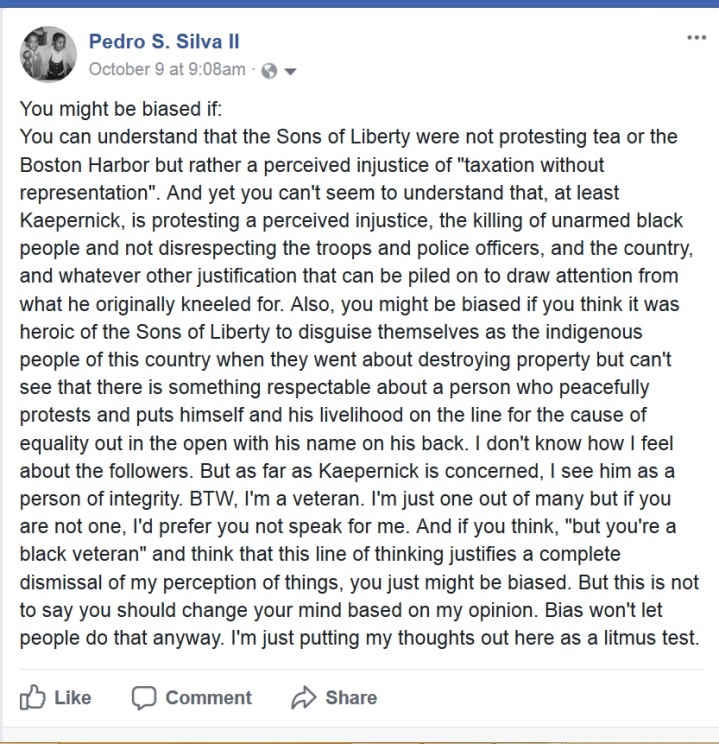 My kid: “Dad, can you draw me a koala?”
Coming Soon: Graticube the Movie
Bootleg Clip #2 - Race is Stupid Funny
Somebody made a bootleg clip of me doing comedy.

Giving Up a Dream to Receive a Vision

If We Can Laugh Together, Maybe We Can Last Together

Fear of an Equitable Workplace (FEW) and the Quiet Quitting Deception

I Work For Your Organization. And You Can’t Stop Me.

What is Worth Knowing?: From a Knowledge Economy to a Know Less Economy