John said to him, “Teacher, we saw someone casting out demons in your name, and we tried to stop him, because he was not following us.” But Jesus said, “Do not stop him; for no one who does a deed of power in my name will be able soon afterward to speak evil of me. Whoever is not against us is for us. For truly I tell you, whoever gives you a cup of water to drink because you bear the name of Christ will by no means lose the reward. — Mark 9:38-41

In the above passage we find Jesus’ apostles being set straight when they complain to Jesus about some person using His name to bring peace to a possessed person. The way they were thinking about the situation was with a gang mentality as if Jesus was the leader of their crew and that this other exorcist was from a different set or rival gang. Most of us have seen that mentality before whether it is with our sports teams (Red Sox v. Yankees), in the streets (Bloods v. Crips), between countries (USA v. the World), or religions (Christians v. almost everyone else including each other). The thought process goes, “If you aren’t with us, then you are against us.”  The gang mentality is a possessive and exclusive mentality.  It is designed to mirror family but without the presumptive idea that blood is thicker than water.  In general the gang compensates for some sense of lack in its members. As such there is a pervasive sense of indebtedness, entitlement, and a strong need for competition that is engendered.  Only by dividing parties into us v. them can the gang perpetuate its existence.  The gang thrives off of conflict.  Someone has to lose in order for them to feel like they are ahead. At least that is how I see it. And if you look through this lens you might see how the gang mentality is pretty much the mentality of the masses.  But from what I get out of the above passage that is not how Jesus lived.

As I mentioned in the video, it is funny that the disciples even have the nerve to complain to Jesus about the man casting out demons in Jesus’ name considering that in Mark 9:14-29 which precedes that account, Jesus says to his disciples, “You faithless generation, how much longer must I be among you? How much longer must I put up with you? Bring him to me.” after they themselves fail to cast out a demon from a sick boy.  The way it looks to me, is that the disciples did the same thing that children do when they get in trouble–they try to get someone else in trouble so that it takes some of the heat off of them. “Oh well, we might not have been able to cast out demons, but that guy is doing it without permission.” I bet it shocked them when Jesus essentially said, “So what?”

One would have thought that Jesus’ disciples would have expected as much from Jesus after all of the other times that he did the very opposite of what they expected. But the disciples were on a roll in Mark 9.  First they couldn’t exorcise the demons, then they argued over which of them was the greatest among them, and then they topped it off by complaining about the other man being able to do what they couldn’t.  Jesus had just told them that the greatest among them would have to be the least and the servant to all and yet here they were trying to be better than someone else. It sounds so very….human. We want to be the best.  We want the recognition. We want other people to look bad so that we can look good. We don’t want to admit our failures or at least distract ourselves and others from them so that we can save face or whatever seems to be in our favor. But the thing about trying to consciously live the mystery of Jesus’ teachings is that they are constantly asking us to get pass all of that. Rather than build us up in the way that we want to be seen, in a lot of ways this religion is trying to break us down so that God can rebuild us in the way that we were intended to be.

I can tell you from my experience that after 30 plus years of trying to walk this path, I am about as clueless as I ever was.  But I am encouraged by that.  I see it as a sign that it is working.  After all, didn’t Jesus teach that his followers have to be like children.  Children admittedly know a lot less than they know.  They have to constantly seek guidance and yet in general they feel so much safer and freer than we adults do.  And there imaginations are just out of this world, because they are not bound by the limitations what they have figured out like we are.  I think that is when we start to lose ourselves–when we start convincing ourselves that we’ve figured it all out.  That’s why I get excited about this walk.  It is always asking me to accept that there is always yet more to be revealed and yet no matter how much I think I know, I cannot exhaust the revelations of the all revealing God.  As it says in Ecclesiastes 8:16,17:

When I applied my mind to know wisdom, and to see the business that is done on earth, how one’s eyes see sleep neither day nor night, then I saw all the work of God, that no one can find out what is happening under the sun. However much they may toil in seeking, they will not find it out; even though those who are wise claim to know, they cannot find it out.

Now for some people that is disconcerting.  But for me, I get excited.  Like when it really hit me that Christianity does not own Jesus the other day, I felt this tremendous joy. Even though I knew about many of the different extra-biblical claims on Jesus out there, I can admit that subconsciously I was looking at these things as borrowing Jesus at best and usurping him from Christianity at worst.  But the fact is that in the Bible I study John 3:16 begins, “For God so loved the world that He gave His chosen Son…  My point being that God gave Christ to the world not to just people who accept the label “Christians”.  Now if someone asked me if I thought that Jesus belonged to us Christians before my friend asked me to share with people about the ACIM teacher, Gary Renard’s, speaking event on May 3rd, I don’t honestly know what I would have said. What I do know is that Mark 9 popped into my head after I essentially said that I didn’t think it was politically correct for me to do so since I am practicing in Christian ministry and am associated with a particular denomination that does not recognize those teachings.

What struck me was the Christ-like way my friend graciously understood my position. Instantly I felt a twinge of what those disciples might have felt when Jesus said to them of the exorcist, “Do not stop him; for no one who does a deed of power in my name will be able soon afterward to speak evil of me. Whoever is not against us is for us.” I was humbled. Thanks God. From that revelation, I began to google some information about other people who practice different traditions but trust in Jesus and came across an article on Jesus Movements around the world.  I mention them in the video–people of different religious cultures who follow Jesus within the context of their religions i.e. Muslim followers of Jesus, Jewish followers of Jesus, Hindu followers of Jesus.  I couldn’t believe it. I smiled about it. There is so much more to this mystery.  As it says in Psalms 139:6, “Such knowledge is too wonderful for me; it is so high that I cannot attain it.” 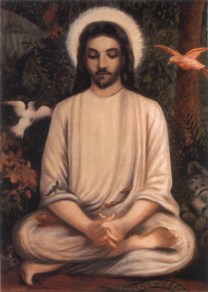 All this being said, I still think it is important for a person to pick a path and see it through. I choose Christianity.  But that does not mean that I have to make a rival of everyone else.  I know that a lot of my brothers and sisters who take on the label of “Christian” might disagree with me, but all I can say offer is what popped in my head when I learned about these other Jesus movements.  It is from John 10 and it is attributed to Jesus and it reads “I have other sheep that do not belong to this fold. I must bring them also, and they will listen to my voice. So there will be one flock, one shepherd.” Other sheep that do not belong to this fold. Like I’ve said many times, I didn’t write the book, I am just trying to see what it is trying to show me.

So this is where I am with this.  I belong to Jesus by choice, but Jesus does not belong to me.